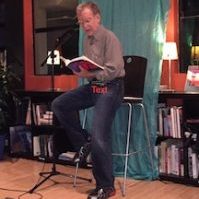 Gerard Sarnat has won the Poetry in the Arts Award and the Dorfman Prize; been nominated for Pushcarts and authored four collections: HOMELESS CHRONICLES (2010), Disputes (2012), 17s (2014) and Melting The Ice King (2016). His work is widely published in academic journals such as Oberlin, Brown, Columbia, Virginia Commonwealth, Wesleyan, Johns Hopkins, and also in Gargoyle, American Journal of Poetry, Main Street Rag, MiPOesias, New Delta Review, Brooklyn Review, Los Angeles Review of Books etc.  Kaddish for the Country was selected for nationwide distribution in the USA on Inauguration Day 2017. ‘Amber Of Memory’ was the single poem chosen for Gerard’s 50th Harvard reunion symposium on Bob Dylan. Gerard is a Stanford professor, healthcare CEO and physician who has built and staffed clinics for the marginalised. Married since 1969; he has four grandkids.

Pirahnas and howlers, boas and sloths of all sorts and age, untended mindbodies angular to the universe,

mostly shrouded in grays and blacks, droop in morose lagoons, swoon under monsoon thickets, doze daymares on the stoop.

A few seek asylum from the asylum.

Their Haldolized emptiness resonates with us slow walkers, breeds a strange acceptance; I feel kinship.

When they don’t take pills an insane three times a day, these endangered creatures end up in my homeless clinic.

Against protocol, once in a while I approach at my peril:some bite and strike out like aroused sleeping animals.

A foxy skirt sashays by — a split second of genital recognition. Yet to her we’re all cuckoo, pitiable and wretched, or invisible, off the grid. Though sure I’m unseen, she scurries to the opposite sidewalk.

A gimp ibis hunched over walker hobbles toward Eldercare. Will that hyena lurks near the entry snatch her purse?

The bell tolls. Toe to heal, I’m called back to the center.