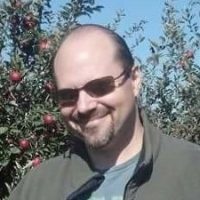 David Batteiger lives in central Ohio with his wife, daughters, turtles and a precocious Australian Shepherd named Echo. He works in the IT field, but has always had a passion for literature and fiction.  Some of his flash fiction and short stories can be found at Flash Fiction Magazine, Altered Reality Magazine, Every Day Fiction and 101 Words.  Additional works can be found at

In a field full of green, towering above all, lives an oak that has seen more years than any of his distant cousins.  He has watched as the world changed through many seasons and sordid histories.

When he was younger, his bark smooth and tight around his trunk, he witnessed a battle rage in his forest.  Men fought and their crimson red life spilled at his roots.  He wondered if their species would survive.  Many of his brothers did not, for the fire of war was not kind to them, their bodies reduced to gray ash and scattered to the winds of time.

He grew older and more solitary.  His thick, grizzled skin was gravely with age.  So prominent was he that the farmers who came to plant the fields did not care to move or disturb him.  They worked the surrounding land and he was comforted with the company of golden corn and wheat.  The crops were like tiny children, chattering and buzzing, that came and went each spring and autumn.

His branches stretched to the calling blue sky, loftier still.  No bird or bee could tell him of another as old or titanic. Men now stopped and relished the shade he offered.  They would sit and relax, hold picnics and socialize.  Young couples would fawn over one another tenderly as summer gave way to autumn, the air thick with the scent of his turning leaves.  He sheltered them beneath his expanse and felt peace, even hope, for their kind.

But then the farmer stopped planting.  Men came again, speaking of that battlefield so long ago, that he remembered clearly and with sorrow.  There was to be a dedication and a memorial.  There would no longer be crops, but paths and lawns.   This disheartened him as grass was a boring companion.  Though he took hope as more humans came for a while, to take pictures and learn of their history–tourism they called it.

More time passed, over three hundred winters since he had been an acorn burrowing through the rich deep soil.  In the distance, steel machines sped by on long stretches of flat, lifeless black.  He took solace in his island of green, tedious as the blades were, and lamented as fewer people came.  Those that did would stare lifelessly into their tiny glass screens, immersed in where they were not.

Greatfather Oak had seen many lifetimes pass.  He had observed the best and worst of mankind and he did not judge.  Finally, a young human, his attention diverted into his phone, sat down at the trunk of the ancient tree.  A passing breeze rustled his leaves and with the swaying of his aged arms, the oak shook loose a small branch directly onto the boy’s head.  It landed with a satisfying thud followed by an exclamation of pain.

Perhaps, he judged a little.