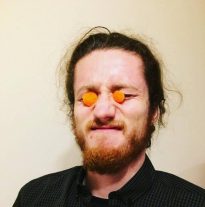 Andrew Cochrane was born in Germany and grew up in various places throughout England, Germany and Cyprus. He lives in Southampton where he is a PhD research student at the university, writing a fragmented novel about the grieving process across cultures. His work has appeared in Litro, Postcard Shorts, Every Day Fiction and Kerouac’s Dog, among others.

A Stream in the Woods

If a river is a dream then a stream is a doze, he said, the man in his wellies fetching the dog

who likes the water around her feet

the way I like the heated tiles in the bathroom: just to stand on.

It’s where she belongs, he says. Dozy mare, he says.

She leans her head down to drink, sneezes

at the water before dipping her tongue that curls at the end like a clover, a paper shovel

so thin it seems it would shred, because being wet

is being vulnerable. Or able to be.

(a wren dribbles by, quick twitch of a wing, and leaves an impression in the water

the shape of a hoof, or a heart with a divot kicked into it)

He pulls her by the collar and there is no resistance left in her old body. Deaf, the man says.

because she likes the water to stand in. 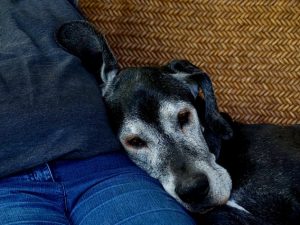