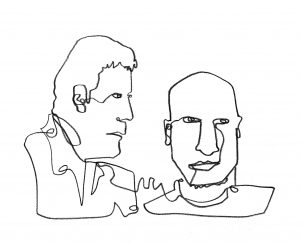 Alan McCormick lives with his family by the sea in Wicklow, Ireland. He’s been writer in residence at Kingston University’s Writing School and for the charity, InterAct Stroke Support. His fiction has won prizes and been widely published, including Salt’s Best British Short Stories and Confingo Magazine.

Alan also collaborates with the London based artist Jonny Voss. Their work has featured regularly on the web, including 3:AM Magazine, Époque Press e-zines, Dead Drunk Dublin, and previously at Words for the Wild. Their book ‘Dogsbodies and Scumsters’ was long-listed for the 2012 Edge Hill Prize. 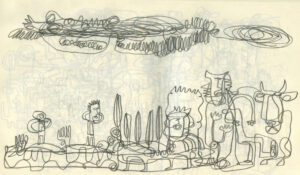 Monty and Victor are apart from their bicycles

and apart from themselves. The earth splits

‘How does it go: “The rain in Spain falls mainly on the plain?”’

The buzzard clouds shift and groan. The final sign!

they walk and sing the song, 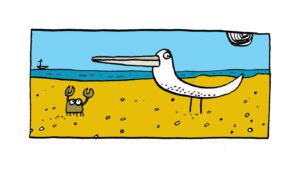 Fester Crab and Benjamin sparred all summer, trying to pluck a feather or pierce a shell. One bright October morning they met for a last hurrah before their beach was carried away on early autumn’s drifting sand.

‘I hold my claws up to you, Benjamin, and offer you the dance of peace.’

‘Old adversary and now dear friend, you dance well for a crab. But it’s time for me to say my goodbyes and bid you one last farewell.’

Benjamin Seagull flapped his wings and flew into the opulent blue sky.

‘I hadn’t finished my dance. Typical of Benjamin to leave before all was said and done.’

At that moment Fester felt a tiny pain on his left side.

‘Most likely a heart attack’, suggested a medical crab at his funeral. ‘It was probably brought on by a change in the weather.’

In his will Fester left his protective shell to Benjamin, who wore it on his back until it dropped off during a violent storm near Newfoundland. 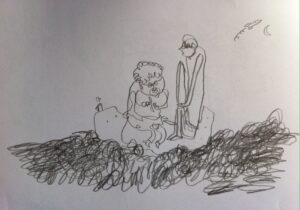 An old lady and an old man sit on an inflatable sofa.

Teetering on the brink, dithering in the face of disaster. All too late, nothing to do about it, we were all doomed. Doooomed! No one believed him.

Earth heating up, waters rising, washing us away in the swell!

Leave it. Let’s rest a little.

I worked for him after they put him in a nursing home, tight as a tack he was.

He was! I put his dentures in a tin and shaved his whiskers with my fingers to save on razors.

Of course you did, makes sense now you say it. Now, are you going to buy me a drink, I’ve come a long way.

You do, we talk ever day. My drink? Please?

Another one said Noah’s ark was real, found the planks and everything.

Don’t need Noah now, and a boat would be a waste of time. They’re building rockets to Mars. Branson’s in on it; he’s one of them.

The chosen ones, been selling tickets on shuttles to his rich friends for years. We’ll be left to fend for ourselves.

He wouldn’t do that. He’s got a nice smile.

Dinosaur teeth, they all have: Charles, Camilla, Cilla.

Black! Dead Cilla Black! My scrotum is litmus. All that itching, it senses things, can tell a bad one from a good one, it knew the deluge was afoot.

Rained 400 days so it must have been very itchy.

And 400 nights, sandpaper on nylon sheets. I’ll get you that drink now.

Daft sod, I was teasing you. Where are you going to get me a drink from?

Their sofa wobbles in a swell, the gloop of dark water twisting and spreading under the moonlight.

Could use a cup to scoop it out.

We don’t have a cup. And we can’t drink; it’s contaminated

We’re done for then?

Of course we are.

Used to be able to.

There you are then. Why don’t we hold hands, have a kiss maybe, share some of the old air raid spirit?

You don’t need your scrotum to tell you that. Now shut up and give me a kiss.

But I don’t know you.

We’ve been married for sixty years you silly old fool, now hold my hands and give me a kiss.

Bert takes Mary’s hands in his, and kisses.

And a wave suddenly moves them from view as a large rocket passes over the moon.

I am a Rock by Alan McCormick

Reasons to Swim Inside the Sky by Alan McCormick

Wish You Were Here by Alan McCormick