Peter Burrows is a librarian in the North West of England. After recently starting to write again his poems have appeared in The North; The Interpreter’s House; Ink, Sweat and Tears and other journals, and most recently in  Coast to Coast to Coast; Marble Poetry; The Curlew; Dodging the Rain;, Dream Catcher; Northwords Now and shortlisted in The Hedgehog Press Cupid’s Arrow Love Competition. 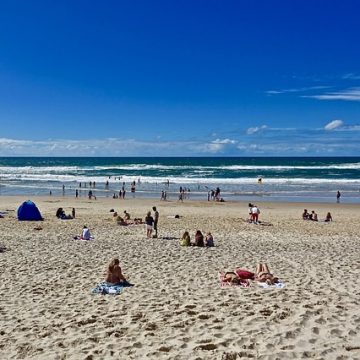 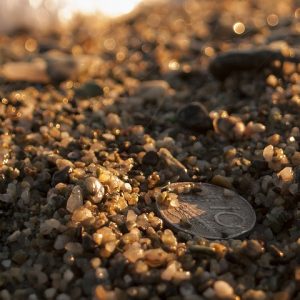 Appearing from nowhere, sifting through gaps

of bathers huddled back to the tideline,

folding away their day, to leave behind

nothing but fine-grained impressions, head down,

halting only to finger-pick his cradled palm.

As he passed we asked what he might hope to find.

which seemed a treat to us, but pulling out

his phone he showed, fingers spanning to enlarge

the image: a solitary gold coin.

Found elsewhere, in some park, worth sixty times more.

Not that he’d sell. In soil, he explained, lost

treasure rests not far below the surface

within the detector’s three-foot range;

suspended in time; waiting to be found.

But here, in sand, everything sifts down

slipping further away until claimed by bedrock.

Naïve, I know, but I had never before

considered anything other than the sand

being endless. But unless some great storm

turned over the depths, churning it back up

to the top, there it remained out of reach.

Later from the cliff-top house we looked down

onto the beach. Everyone gone but him.

Still scanning the sheen of the ebb tide’s retreat.

The last light of the sun sparkling. Shallow

streams, shimmering silts, all flowing back to the sea.