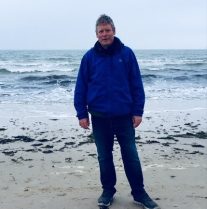 Alan McCormick lives with his family by the sea in Wicklow. He’s been writer in residence at Kingston University’s Writing School and for the charity, InterAct Stroke Support. His fiction has won prizes and been widely published, including in Best British Short Stories, Confingo, The Bridport Prize anthology, and online at Words for the Wild, 3:AM and Epoque. His story collection, Dogsbodies and Scumsters, was long-listed for the 2012 Edge Hill Prize.

He also writes shorter pieces, known as Scumsters, in response to pictures by artist Jonny Voss. See more of this collaboration, along with Alan’s own fiction at www.alanmccormickwriting.wordpress.com 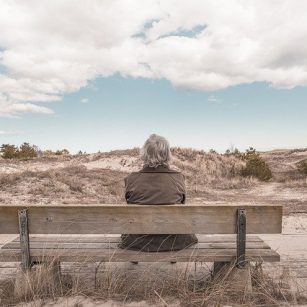 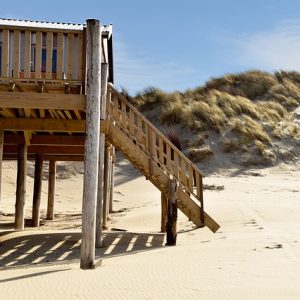 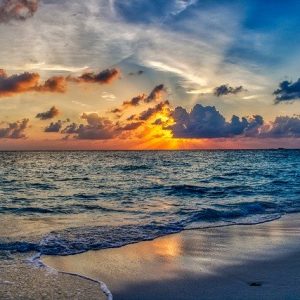 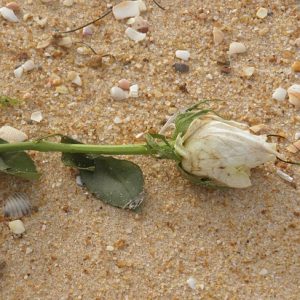 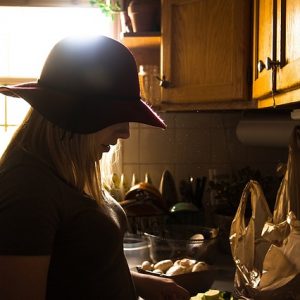 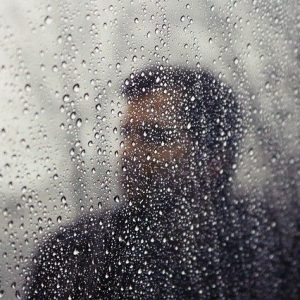 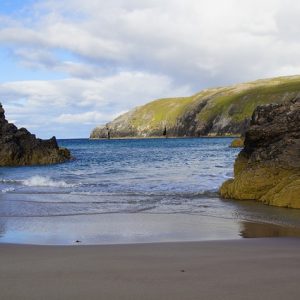 It’s night. I’m lying on the sofa and the wind howls through the red clapperboard fisherman’s hut Mum has always called home. The timber frame creaks, there’s a scurrying of blown sand, and I can hear crabs scraping and burrowing under the floors.

I haven’t been up to Scotland for a year and in that time so much has changed. Her face, always so ruddy and strong lined, looks pinched, yellow somehow, and her long sandy hair is now overrun with grey. And I’m not sure if it’s possible but she seems to have shrunk, her once sparkling, mischievous humour blown away. I’ve been here a few days and she hardly sleeps, is always on the move throughout the night, scattering pills, scratching at her self, muttering into walls.

I’m woken by something banging down below. I get up to investigate. The light is on in the kitchen and I can hear her talking:

‘Must get the clock fixed, send old Robbie his cheque, get my boy his milk!’

I feel heat come into my cheeks and I don’t know whether I’m angry or just embarrassed; Mum is naked, wild eyed, the window above the sink banging open and shut on the icy rushes of wind.

‘Oh, Alex, I didn’t hear you. Is it time for school already?’ she says, her voice suddenly calm, matter of fact. ‘Let me heat up a pan and make you a hot drink.’

I feel ashamed that I haven’t visited her more but I’m also ashamed of her, of how she’s become. She walks towards me and I don’t want her to get too near.

I cover her with my dressing gown.

We sip our drinks together at the table not speaking. Then she says she’s tired and needs to sleep. As she gets up she stumbles and I see her scar again, only it looks purple and angry.

‘The one on your ankle. The one you got on the beach.’

‘I got it from a shoe buckle, not from the beach,’ and she kisses me on my head, saying ‘you won’t forget the light, son.’  Then, as if on automatic, she clicks it out anyway and closes the door behind her.

I sit in near darkness, the pale blue flame of the hob burner for company (she’d forgotten to turn it off). Above her ankle my mother has always had this distinctive star shaped scar. I’d forgotten about it while I’d been away but I’d noticed it again yesterday morning. She was moving away from me, a pan of thin porridge griped in her hand, treading on the worn heels of her slippers, seeming to slide rather than step. I asked her to tell me the story of how she’d got the scar, a story I’d heard as a child many times before but each time in a different way. This used to be our entry to a shared imaginative world, our spinning of family myth and lore. Yesterday was no exception, just more elusive. By way of explanation she stood over the sink, looked out of the window at the wide stretch of sand and sea, and pointed.

Days later and the sunset over the beach is unpeeling a wound, the sea smeared in yellows and reds. We’ve got back from the funeral. A burial at sea is a terrible thing, the most cold, dismal experience imaginable; I’ve only just stopped shaking. I’m sitting with my sister in the kitchen at the small metal table I’d sat with my Mum only days before. The rest of the mourners are huddled in the lounge. We’re drinking brandy and hot milk. It’s the first time I’ve been alone with Therese for years. She looks lost and tired, and so I lie to her:

‘You were always in her mind, Therese, she never stopped talking about you.’

She starts crying and I feel numb, held in, like a child sleeping under a heavy duvet.

‘She knew how much you cared . . . ’ and then I change the subject: ‘you know the scar above her ankle, she came up with another story about it before she died.’

‘What? What are you taking about?’ She sounds irritated, as if I’ve just stirred her from a dream.

‘She said it was caused the buckle of a new shoe but she didn’t say any more. It made me fantasise about the kind of shoe that might have caused it; like she’d been a glamorous fifties swinger, a femme fatale who danced the night away in a pair of exotically buckled, tight new dance shoes that an admirer had just bought for her.’

Therese isn’t listening, and takes my hand and strokes it up and down intensely like she’s worrying on beads:

‘Alex, Mum didn’t suffer too much, did she?’

Then she cries again, big quaking sobs this time, her features erupting, re-arranging themselves. I feel the shakes into my chest, bruising deep inside, but I’m still in my head and can’t let go.

We both fall quiet and listen to the wind against the windowpane, both remembering Mum in our own way. I think of her a few days before, looking out, pointing, and I break our silence:

Therese kisses me on the head as Mum had done the other day.

‘She would have liked that, Alex.’

I get up and rest my hand on her shoulder for a moment and then go to see how the other mourners are getting on. There are glasses to fill, and maybe more stories to hear.

Later that night I go for a walk on my own. The moon, generous and round sends waves of soft yellow light to glisten onto the slow moving sea. As I walk I pick up shells, feeling and examining them, before dropping a few chosen ones into my pocket. In the shallows where the water lies still and translucent over a narrow trough of sand, there is a small starfish. I gaze at it for ages and then bend down to pick it up. As I do it leaves its perfect grainy outline, its lifetime’s mark from the deep, in the sand. The top surface is rough and callused like an old scab but underneath it’s pearly, milky-white, smooth like ivory. I run the tips of my fingers on its cool underbelly and feel tears, hot tears, salty and stinging, run down my cheeks. I carefully place the starfish back into its imprint in the sand and notice the harsh top layer has cut my skin. Blood drips from my finger and swirls like oil into the shallows.

As I walk back to the house I think about what Therese had said before she left: how Mum first had cancer when I was really young and that her mythical scar came from a simple operation to remove a malignant mole. No one had ever told me story before. I find myself looking up at the sky at a lone northern star glimmering vainly on the horizon. I stare for a moment, then shut my eyes and think about the words I’ll use to tell Therese about the emptied bottle of sleeping pills and Mum’s last, secret late night drink.

No need for any more stories, I just want to get back into the warm, heat up a pan for myself and go to sleep.

I am a Rock by Alan McCormick

Reasons to Swim Inside the Sky by Alan McCormick

Wish You Were Here by Alan McCormick