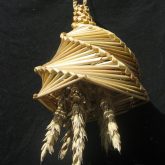 I am the last of harvest,

by the late late sun.

at All Hallows; reedy,

in an embrace of gold.

spun magic. I am

a threshing of seasons,

my effigy. I am all

cut from the final

Sarah Doyle is the Pre-Raphaelite Society’s Poet-in-Residence.  She holds an MA in Creative Writing from Royal Holloway College, University of London, and has been published widely in magazines, journals and anthologies, and placed in many poetry competitions.  She is co-author (with Allen Ashley) of Dreaming Spheres: Poems of the Solar System (PS Publishing, 2014). www.sarahdoyle.co.uk @PoetSarahDoyle