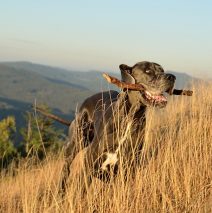 Alan McCormick was born in Mombasa and now lives with his family by the sea in the Purbecks. He’s been writer in residence at Kingston University’s Writing School and for Interact Stroke Support. His fiction has won prizes and been widely published, including Salt’s Best British Short Stories 2015. His collection, Dogsbodies and Scumsters, was long-listed for the 2012 Edge Hill Prize.

He also writes flash shorts in response to pictures by Jonny Voss. Their work can be seen on www.dogsbodiesandscumsters.wordpress.com

Alan has just completed Holes, his first book of non-fiction, and Wild in the Country, his second story collection. 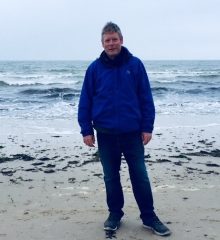 The smell comes first onto the veranda, nauseously high, damp and wild, its long slinking body appearing after, tail drooped and trailing, the listless desperation of hunger, the deep cathedral vaults of its chest rumbling thunder.  She waits behind the door, barely breathing, her hand cocked on the rifle’s trigger, hoping her nerves won’t betray her, the leopard won’t sense her close. But it stops, stretches out and yawns, the crude outline of its opened jaw making a cruel shadow play against the mosquito gauze tacked on the pane of the door. It sniffs under the crack and she freezes – could this be it?

Fifty years later, she lies in a small room on an expensive electrified hospital bed, a slowly undulating mattress of siphoned alternating air designed to reduce pain, the coil of its pump snaking from under the mattress, asthmatically swelling, sighing, disturbing the dust swirls under the frame. The leopard enters the room, padding past her at the door as if she isn’t there. When it turns to face her she sees its yellow eyes, raging with desire, a smear of blood, dark and glistening on the white of its fur around its chest.

I come to say my goodbyes to my aunt, lying silenced by a stroke, unable to form any word, rasping for air, her bed an open casket waiting to wheel her out.

Evelyn has never been needy or very forthcoming about her life: over five decades a widow, alone and defiantly self-sufficient, even at ninety eight clinging on in her rented flat, a careful, frugal, post-colonial life, until the final stroke got her and forced her first into hospital, and then to private end-of-life-care. Once her self-sufficiency was dealt a mortal blow, the game was up. She’s stopped eating and drinking to try and help things along.

I look at her and find myself unable to communicate, to find the words I feel I should be saying: ‘You’ll be okay, it’s all right to let go’ but she’d distrust that directness, that intimacy anyway. We’re both silent, though one eye, deep and inscrutable like a whale’s in its bruised folds, wrinkles of flesh, will struggle to open and blink in response if I ask the right question:

And if I dare to ask ‘are you in pain?’ she’ll whinny and sob.

The suspicion of the care staff is that she’s afraid to die – despite a long held belief in an afterlife, a carer’s talk of ‘angels surrounding her’ makes her wince and cry out.

Last week was better; she was more awake, unexpectedly blowing kisses, her lips popping open and shut, inviting a response and I kissed her on her cheeks and whispered in her ear that we all loved her.

But mostly now, as morphine seeps though her veins, she sleeps, the deep jungle of her lungs groaning, the sounds of rumbling oncoming thunder.

Evelyn was always hard-working and thrifty, graceful and self-possessed, hair immaculate, clothes pristine and well cut, slightly aloof and cautious but unfailingly polite and caring.  Her flat gave little of her away – save the African artefacts she’d brought with her to England from Nairobi over forty years before  – wooden sculptures of bucks and wild cats, watercolours of Mount Kenya, a mahogany Ottoman chest, the old-school zebra skinned pouf, the head of a Masai tribesman mounted on the wall taking it all in.

A regular schedule of television had formed her life in old age, the Radio Times neatly secreted each week in a green leather folder, the news (always the news at six and ten), documentaries and dramas, pages of crossword puzzles and Sudoku cut from the newspaper, everything scrupulously tidied, any mess sorted out and dusted away.

With her African past laid out like a room in a philanthropist’s museum, and her life inexplicably shrunken and cellophane-wrapped in England, it’s been difficult to get close to what might tick below.

The times I’ve seen her animated and happy is when she’s been in the company of larger-than-life characters, laughing heartily, mock disapprovingly at her beloved younger brother’s (my father’s) jokes and stories, his endearing sense of mischief. Evelyn had an unknowable past but to me she was always more an observer, an habitual listener, curious but non-judgemental about other peoples’ lives, more comfortable in the shadows.

It’s possible that there are some deep chasms to discover but if there are they remain long buried, half her life spent in Africa rarely described or brought to life. Two friends from childhood, also in their late nineties, came to settle in the same Sussex village as her four decades ago. Perhaps they know more? Up until recently they’d met once a week to play bridge, chat, and maybe to reminisce, but now they are bedbound, unable to communicate, close to death too – a secret society holding their confidences close to their chests right until the end.

Evelyn had been widowed twice, to ‘men’s men’ out in Africa, Kenya cowboys, beer swillers, who went ‘native’, wild and reckless, with stories to bluster with male accomplices, exhaling plumes of cigar smoke on a club veranda, trails swirling into the star-filled southern sky.

Both husbands took flight for days, leaving her alone at home deep in the bush, miles from other neighbours.  I imagine she might have been an older sister figure, holding fort, nursing their wounds, humouring their macho pride when they came back, tail between their legs, after one too many escapades. I glean this from a few snippets let out over decades. They are in truth rarely spoken of, shadowy spectres, fleeting visitors as they were in life.

But Evelyn told me several times how she was often left with her dogs, two Great Danes and an Alsatian, settler dogs large enough to fend off a lion or a bandit if one came visiting. And once she told the story of the leopard, how it killed one of the great Danes, injured the other dogs and then came looking for her.

The damson dread of blood on its fur, fresh blood, a high bitter smell that catches at back of the throat, making her retch. In the dark at the end of the garden, one of her dogs cries out; another, her favourite, lame and injured but riven by instinct to crawl on its belly up the slope toward the cottage to rescue.

‘Stay back!’ she cries but it keeps coming.

She wakes suddenly, her one good eye fixing on the exit door beside me, her breathing a plaintive whisper, a judder, an inescapable sigh.

A flash of orange light arcs the wall above her bed, jumping, dog chasing, sunset falling into her nest of pillows. I smell it then, moving past me towards the door: feral, the wildness of death invading my nostrils, a whip of its tail and it’s gone, safe at last, an escape route for her to follow.