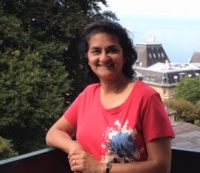 Born in India, Mangal Patel has lived in London, UK since her early childhood. She loves creative writing which she took up after retiring as a Director of IT. Her work has been published on the web and in a number of anthologies. She writes for the pleasure it gives her and hopes her readers enjoy her work.

Mangal’s husband and twins are her source of joy and keep her smiling. 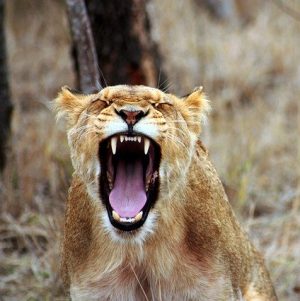 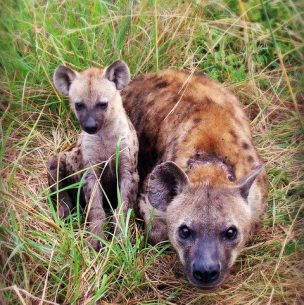 The elder lions are always there before us. Their claws tear at tough skin letting out a stream of wet red that reaches as far as the fringes of the frenzy where we wait. Low growls warn us to wait our turn but close on our tails prowl hyenas who will settle for one of us cubs if the carcass proves too difficult to steal away.

Between the ferocious tussling a gap appears giving the largest and quickest an opportunity to squeeze through and grasp a morsel. It’s more of a lick as our mouths and teeth are too small to do more than slide across the still, pulsating meal.

“Life is unfair,” I meow but above the roars of the pride my grumbles are ignored. Worse still, I am swatted away by the flick from a punishing tail. Landing too close to the predators circling this feast, I yelp in terror. This time my mother catches the scent of my plight. Her body taut; her ears strained; she narrows her eyes and stares at the hyena pack.

A rumbling roar halts the elders’ guzzling. I cower behind sun-bleached grass as tension ripples between my clan and the enemy. Time stands as still as the frozen stances taken by the two groups. Eyes are locked. Hardly a breath breaks the silence.

Then, a tiny sneeze from within the hyena pack reminds them of their own cubs. Both sides have much to lose. Time for a stand down, live another day, fight another night decide the leaders. As the hyenas slink away, I scamper back to the fold and fall patiently behind the others to feed.