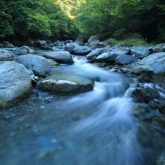 As if swords had been used

not pens, to divide the country

round rock and river.

the deal signed and sealed.

People told what side they belonged to.

Do you stir while dosing in chimney nooks?

Firelight flickering on your cups,

No one told the trees,

to cast their leaves over land

Informed the stream to call itself

beck or burn, whichever side it babbled on.

Or warned the crow to curtail its flight

Yet wood, water, and feathered wing

pay no heed to the declarations of men.

Bearing the centuries of squabbles

knowing bedtime is near.

Kathryn Metcalfe hails from Renfrewshire and has been published in many magazines and anthologies, she is a member of the Mill Girl Poets who wrote and performed a stage show about the lives and heritage of the thread mill workers in her local town of Paisley which went on to feature at the Edinburgh Fringe Festival. She also founded and runs a local open mic event for poets and writers called Nights at the Round Table.