Her damp feathers bank through the dusk

as she scans the white heart of her face

over a flooded ditch and cold field.

of a vole, a bulge in her gullet. Its warmth

crushes into her frosty softness.

The salt marsh is sodden and, beyond it,

a spring tide rides high, up the estuary –

but, out here, the owl’s buff back glisters;

Robyn Bolam has published four poetry collections with Bloodaxe. New Wings was a PBS Recommendation and Hyem, which includes eco-poems with settings from the New Forest to New Zealand, appeared in October 2017. Widely anthologised, her work is included in Land of Three Rivers (Bloodaxe, 2017) and other publications include Eliza’s Babes: four centuries of women’s poetry in English. She is Hampshire Poet 2018 and, in 2016-17, led the combined-arts Ferry Tales project on the Solent. www.robynbolam.com 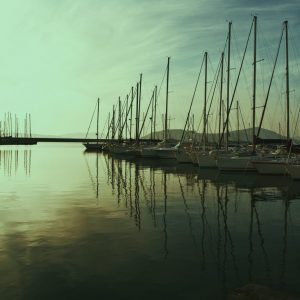