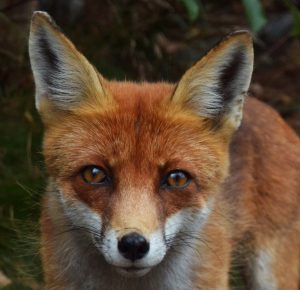 dabs of white on its feet.

Last night we surprised it:

a sudden appearance in the headlights

watched it slip into a field,

then hesitate and turn back to look at us,

its eyes burning with our lights.

Now it lies on the bank, stiffening.

You wonder if it’s still breathing

and I poke its hard side with a stick,

The fox is perfect,

its brush ripe with summer,

still holding us with its stare.

Hugh Dunkerley grew up in Edinburgh and Bath and now lives in Brighton with his wife and young son. His first full length poetry collection, Hare (Cinnamon Press), came out in 2010. A new collection entitled Kin will be published in 2018. He also writes on literature and environment and his award winning lecture, ‘Some Thoughts on Poetry and Fracking’, was delivered at the 2016 Hay International Festival. He currently runs the MA in Creative Writing at The University of Chichester.