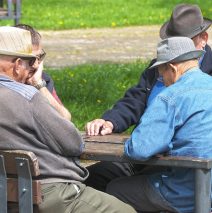 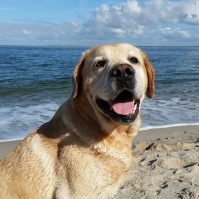 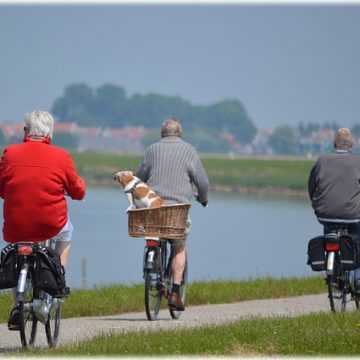 Barbara Lovric is an American expat now living in Ireland. A previous Irish Writers’ Centre Novel Fair winner, she’s had flash in The Fiction Pool, The Incubator, and The Cabinet of Heed. She was short-listed for the 2017 Over the Edge New Writer of the Year Award and long listed for the 2017 Bare Fiction Prize. Her debut novel will be published in 2019. Barbara is also a Senior Editor and Reader for TSS Publishing and runs a local writing group. 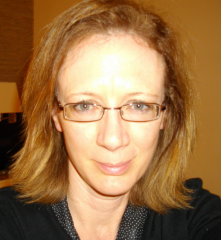 Old Men and the Sea

On a fine October morning, Paul McGillicuddy made his daily pilgrimage to Banna Strand with the rest of the old men. During the three days of summer, the four car parks were choc a bloc with vehicles spilling onto the sand dunes and down as far as the leisure centre. By October, the chipper van, lifeguards, even the surf school had all closed up shop and all that remained were those who loved the sea.

Paul got out of his car, an old Opel Vectra in need of a new bumper and tail light, and yanked open the door to the back seat.  Bella was nearly as old as he, at least in dog years and Paul had to help the old girl down so her bad hip didn’t give out. There was no need for a lead, Bella could barely navigate the ramp down to the beach, let alone run amok.  Muzzle as grey as the few hairs left on Paul’s head, Bella grinned and gulped the sea breeze, then ran straight for Vinnie who always gave her a biscuit.

Vinnie was from deep up the country with an accent so thick even Paul, who’d lived here all his life, couldn’t make out half of what he said. Everyone knew Vinnie by his car – a Toyota covered in bird droppings with a Ford Mustang logo emblazoned on the bonnet. Heaps of junk were piled in the back seat like donations at a charity shop. Everyone also knew Vinnie’s story: the brother who died in the bed next to him; the cows he bred but wouldn’t send down to the abattoir; acres upon acres of land – not great this close to the ocean but grassy enough for a small herd.

“Supposed to last a fortnight, if you can believe it.” Paul said.

“Is that so? Sure, we’ll take our summer any month we can get it, even if it’s October,” Vinnie said, stripping down to his smalls. “The water’s amazing, so it is, like a baby’s bath.”

Every morning, no matter the weather, Vinnie came down for a swim. He didn’t need a wetsuit as mounds of fat kept him warm. He was a nice enough lad of 68, bit queer in his ways what with the rock concerts he went to down in Cork and the old set of drums he banged in his shed for half the county to hear.

“I better keep going so, Vinnie,” Paul said and led Bella across the car park.

As usual, Tony sat on the wall, bicycle crumbled at his feet. He never said much to anyone and Paul reckoned that at 85, Tony’s lips had long forgotten how to spawn words. Tony sat for hours and stared at the waves, the ebbs and flows of his life played out before him in thunderous crashes. His wife, Maire had died some years back – they cut her open to fix a broken hip but the doctors took one look at the blackness inside, sewed her back up again and sent her home to die. No wonder she’d never been able to have kids, that sort of thing takes decades to do its nasty work. Despite his silence, Tony must have yearned for some sort of communion with the world, even if it was only listening to the tales of the sea.

Paul nodded to Tony, then led Bella down to the sand. The tide was retreating, leaving a trundle of stones and seaweed upon the shore. That mad yoke, Martin was already out in the water with his surfboard. Slick as a seal in a black wetsuit, the seventy year old lived for big waves brought on by winter gales.  Paul watched as he rode in a small wave.

“Right, Paul.” Martin waded to shore and plonked his board into the sand. “There’s nothing going today. Damn sprat are in. Like trying to surf a bog.”

Schools of sprat coursed through the Kerry coastline every October, running so thick all you had to do was dunk a bucket in the water to get a few kilos of them.

“Almost ran into a couple of dolphins there.” Martin said, unzipping his wetsuit. Before retiring, he’d been a doctor and a health freak and it still showed in the gleam of his wet muscles.

“They come in after the fish,” Paul said. “Same as the basking sharks.”

“And Bella.” Martin laughed. Paul turned to see Bella snarfling up dozens of the small fish stranded on the shore. They were too small to present a choking hazard so Paul let her be. Hopping from one carcass to the next, it was the most animated she’d been in months.

The wet, hard sand of low tide made for easier walking. Paul had a good pair of walking shoes his wife, Linda bought him at the Aldi. Ever since the diagnosis, he’d decided not to go gently into any damn night and was going to fight all the way.  At sixty-five, old was a constantly moving target and he meant to outlive all the old geezers on the Strand.

Fat chance of that, the surf mocked. Your lungs are blacker than my deepest depths.

Paul picked up one of the smooth stones stranded on the shore by the tide and threw it back in the water. “That’s what I think of your opinion.”

It was ironic. He’d never smoked a day in his life and yet somehow here he was, dying of lung cancer. They said it was that radon – their bungalow was built on a mountain of the toxic stuff. Thankfully, Linda and the kids seemed okay. For now. Linda said the sea air would do him good. Nevermind, his lungs hacked like broken glass when he went home. The doctors had given him three months but here he was two years later, still walking this beach. He guessed Linda was right. As usual.

They’d discovered the cancer in Bella around the same time his x-rays came back with more shadows than the sea on a cloudy day.  Paul felt worse about that than he did his own lot but there was no sense laying down and letting the devil do his work, they had to fight all the way.

“It’s not our time to go old Bella and that’s that.” He said, patting Bella on the head.

They were nearly out to Black Rock now and sure, who would be coming down but Seamie O’Sullivan with his six greyhounds.

“Fine enough,” Paul replied, keeping an eye on a pup who sniffed round Bella’s hindquarters, looking to play. Bella was more interested in finding more fish than chasing a pup around, even if she was able. “How’s the pup?”

“It’s like having a toddler around the house, so it is. Keeps me young.”

Seamie was young. Well, younger than the rest of them. Only sixty, he’d done well for himself in farm equipment sales, then sold out to an American conglomerate. Now, he trained the greyhounds and travelled.

At Black Rock, Paul sat on a grassy dune and pulled a bacon sarnie from his pocket. Linda has wrapped it up in some tin foil and it was still warm. There was little better in life than a bacon sarnie after a bit of fresh air. Obviously, Bella agreed ‘cause once she caught wind of it, she gave up sniffing for fish and sat at his feet, eyes tracking his every movement. Paul ate one half and threw the other to Bella.

“Got to enjoy it while we can Bella.” Paul said while removing his shoes and socks and digging his feet into the brittle sand. He loved the sea. That one year he and Linda had moved to the midlands to take care of her mum was the worst year of his life. After that, he vowed never to be that far from it again.

The sun took the opportunity to show itself so Paul lay back and closed his eyes. The lullaby of the waves as they crashed into shore soon had him drifting. Memories like seagrass waved in the ocean of his mind.

It was Bella’s bark that brought him to.  She was agitated about something.

Bella whimpered and cried as she pawed him. “Come on, girl,” Paul said, shading his eyes against the sun, now so bright it was like God had cast diamonds on the water. “It’s time to go.”